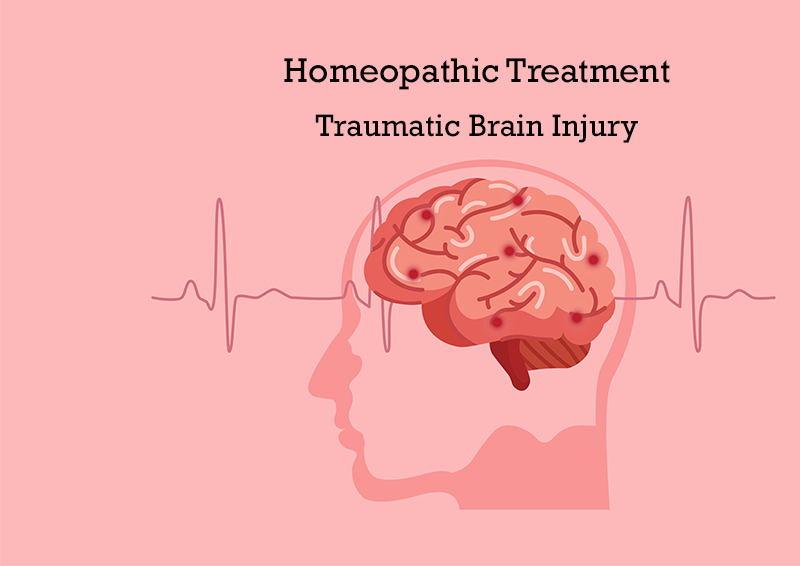 Traumatic brain injury is said to be disruption in the normal function of the brain which can be due to jolt of the head or blow, or head when suddenly and violently hitting an object.

Bruising of brain tissue ,swollen brain with pool of blood from leaked arteries ,veins or capillaries

This may occur with or without associated mass lesion.

Insufficient blood supply to certain parts of the brain.

Symptoms vary depending on the severity of the injury:

Arnica is the best effective remedy for any kind of injury like falls, Blows or any kind of injury arising from blunt instruments to scalp, haematoma, concussions, and contusions, skull fractures  are all treated by this remedy, soon after a head injury a state of shock confusion drowsiness stupor that appears can be dealt with this remedy burning type of pain, soreness ,tenderness is a peculiar characteristic of this remedy

Head injury which may cause mental disturbances such as confusion ,slowness of perception , inattention ,drowsiness dullness ,weakness ,loss of memory , unintelligible muttering ,constant thoughtless of starring at one point, rolling of head from side to side ,dilated pupils boring head are all characteristics feature for this remedy

Head injury followed by vertigo ,it becomes worse when turning the head sideways, lying down in bed and moving head may worsen vertigo ,noise or movement of eye can also lead to vertigo , stitching type of pain ,mental disturbances like memory loss  muttering of speech calls for this remedy

Dr. Vaseem Choudhary along with his team has treated many patients successfully of head injury with his expert knowledge and mastery skills so if you are looking for your cure please visit our center at Homeo Cre Clinic, Pune for further assistance.