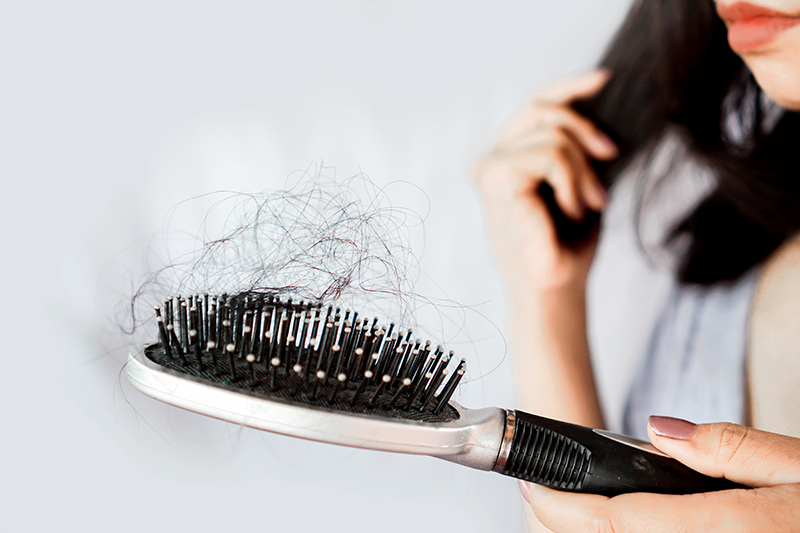 Mrs. S. R. S. (Patient Registration Number ABB-76) thirty years old female, came with a complaint of a hair fall on 29th October 2020 to Homeo Care Clinic. The hair fall was from the front area of the scalp for two-three years. The complaints had increased since last two months wherein around one hundred to one hundred and fifty hair strands used to shed off every time she would wash or comb her hair. Hair fall was from roots and hair used to fall throughout the day.

Her volume has reduced by thirsty percentage and also thickness of hair. She had applied many ayurvedic oils and Tugain solution (Minoxidil) for two to three months but had stopped it due to scalp irritation and also there was no improvement. She also complained of Migraines for three years.

She had a good appetite. She was comfortable in the winter season and her water intake was very less and desire sour things.

She was basically a short-tempered person. She used to mix up easily and more of a talker person, shy person, and used to cry easily.

Ongoing through the case in detail Dr. Vaseem Choudhary prescribed her Pulsatilla 200c and some other medicine.

On 24th November 2020, she came for a follow-up. Her hair fall was considerably better. The number of hair fall had decreased by sixty percent. She lost only twenty to thirty strands of hair now. Dr. Vaseem Choudhary continued the medicine.

On 30th December 2020 after 1 month, she reported, there was a drastic improvement in hair fall. It reduced to less than twenty strands of hair per day. Earlier hair fall was 200 per strand and now it’s just five to ten strands per day and She was astonished at the improvement. The hair thickness had also improved. Accordingly, she was advised to continue some medicine for few more days and then stop the treatment

The above case- study shows that homeopathy is a better option over allopathy for treating hair fall for the simple reason that it does not cause any side effects. And also the good effects last long.