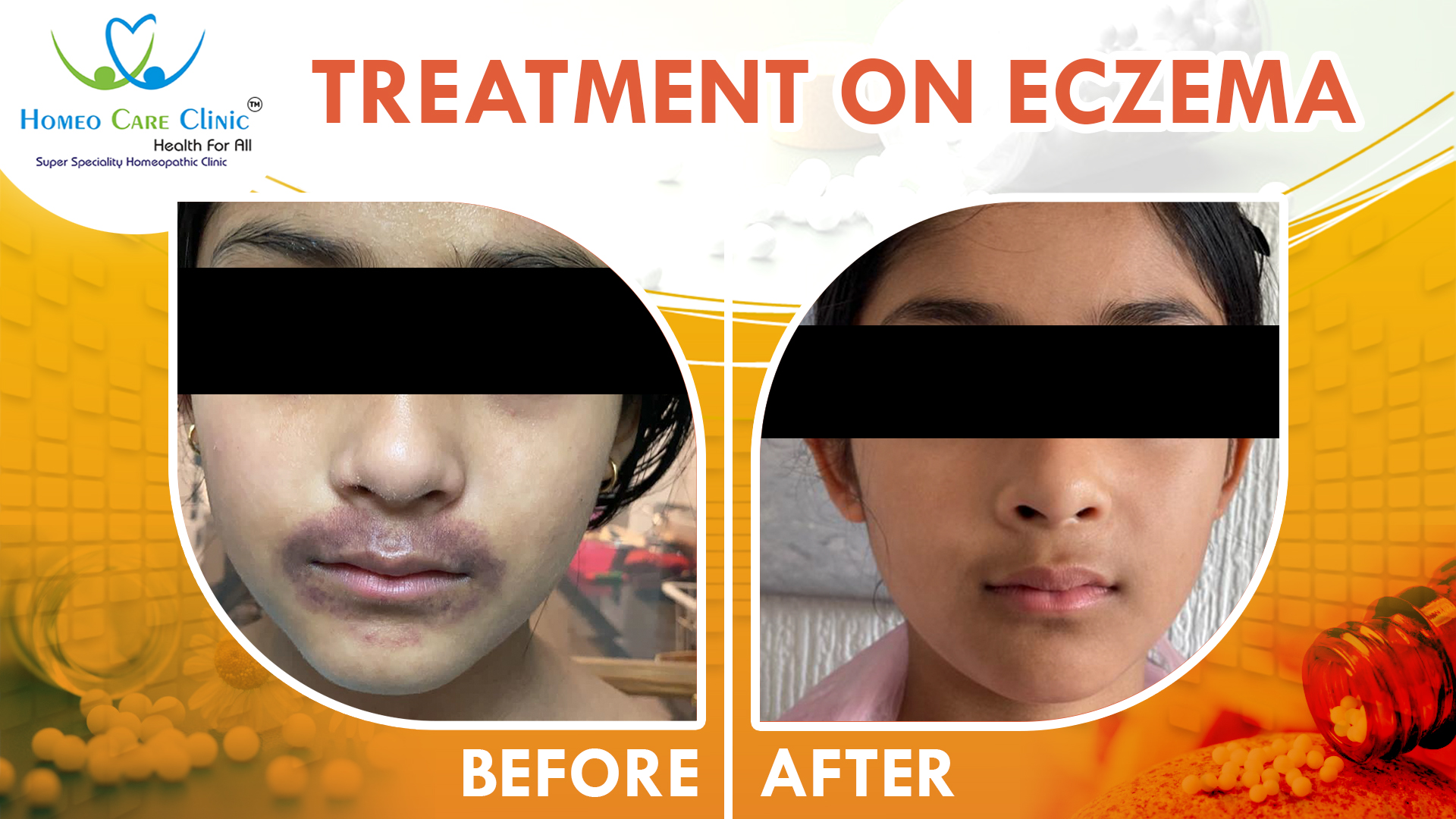 The father of an 8-year-old girl child, Ms. S. (Registration Number: ABE-89), consulted us over the phone on 29th January 2021 as they were unable to come to India as Covid-19 and lockdown were going on. They consulted us through Video Consultation on What’s App for the treatment of her daughter’s Eczema, which she was suffering from in 2018.

The patches were bilaterally present on the face and around the lips. The part used to become red and inflamed and shin with pigmentation, itching, & roughness of the skin and then later on used to turn black. This was a steroid-masked case where the child was treated with steroidal creams, which had suppressed the Eczema for nearly 2 years.

The child had suffered a relapse & the Eczema had returned at the same location every year and this made the child’s parents very anxious. She did not want to start with the steroids again, as she was aware of the consequences of steroidal use. So, before the flare & uncontrolled spread of the Eczema would occur, the patient’s father wanted to seek Homoeopathic help.

The child had a Past History of fungal infection.

The child was following a mixed diet, and she had a craving for sweets & chocolates. Her intake of water was very low. She liked warm food. She had nightmares and used to cry in sleep. She was intolerant to the summers. She had normal bowel functions.

As described by her father, the child was very enthusiastic, Inquisitive in learning new things, and hyperactive child. She was a cheerful and extroverted child. She was timid in showing her anger. Good memory. Overall an obedient child.

Based on all the case details and after studying the case thoroughly, Dr. Vaseem Choudhary, M.D. prescribed homeopathic medicines to the patient for 12 weeks.

At her first follow-up on 7th March 2021, the rashes on her face increased. It flared up all over the face. The rashes were coming in a periodical manner after every 15 days weeks of following homeopathic treatment, But the positive thing was the intensity of rashes has reduced. Earlier they used to apply steroidal cream for it to disappear but since starting with homeopathic medicine it started going on its own. The child was feeling relaxed. The dryness and itching reduced. Advised to continue with medicine.

At her second follow-up on 12th May 2021, The pigmentation had disappeared. There was no evidence of any of the symptoms of Eczema over the affected area or any other part of the body.

The patient is continuing the treatment happily. She is completely relieved of her Eczema & is hopeful that the relapse will not recur. Homeo Care Clinic has treated the root cause of the Eczema successfully.

This case highlights that homeopathy is effective in treating chronic, recurring autoimmune diseases like Eczema in individuals of all age groups. Homeopathy also treats steroid-suppressed eczema in kids and minimizes its relapse successfully and safely without any side effects. Homeo Care Clinic has an Online Consultation option where patient around the world and contact and has an Expert Opinion.

Homeo Care Clinic, headed by Dr. Vaseem Choudhary, is one of the best Homoeopathic clinics treating such patients worldwide.

The medicines were packed and couriered to the UK through DHL International Courier.

We treat patients from the UK, USA, Dubai, Australia, UAE and many other countries. Get an expert opinion on your ailment, click here to ask Dr. Vaseem Choudhary’s team directly.