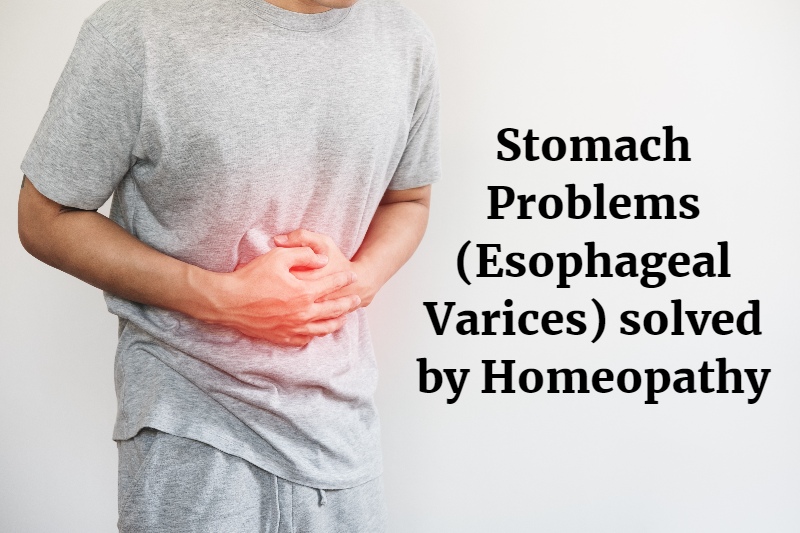 Esophageal varices are swollen or enlarged veins on the lining of the esophagus. Varices can be life-threatening if they break open and bleed. Treatment is aimed at preventing liver damage, preventing varices from bleeding, and controlling bleeding if it occurs.

A 64-year-old male patient Mr. KVJ (Registration number: ABN-79) had approached Homeo Care Clinic for his complaint of Swallowing difficulty, Food stuck up in the throat, eating light food, thick saliva, burping, and vomiting, he was suffering from this complaint since 2007. He was diagnosed with Esophageal varices.  He did Balloon tamponade surgery in 2008 and peroral endoscopic myotomy (POEM surgery) in 2018. He was better for about 2 years and again he started with similar complaints. According to Surgeons, most patients do not get symptoms for the next 10 years but again he had similar complaints in just 2 years. So doctor advised to Redo POEM surgery. The patient was reluctant to again go for surgery, so he opted for Homeopathy. He came to the clinic on 6th October 2021 with all his reports.

Dr. Vaseem Choudhary went through his detailed case history. He was a non-vegetarian and had an average appetite. He had craving for sweets and an aversion to spicy food. When asked about his thermals, he told us that he cannot tolerate the hot climate.

The patient was a friendly, calm, and composed person. He was more of a talker. Jolly person and cracking jokes. He was doing multiple charity works. The patient was expressive. His intellectual sphere was also considered. His memory, perception, and intelligence were good. Public speaking was good.

Dr. Vaseem Choudhary had gone through the whole case, and, after analyzing the case in detail, he prescribed the Sulphur 200 single-dose and explained diet and lifestyle management in detail to the patient.

When the patient gave his first follow-up on 16th November 2021, he was 70% better than earlier. The severity of his pain in swallowing has reduced. Food stuck in the throat has reduced by 70%. Thick saliva reduced, Started eating a bit heavy food, No Burping, No vomiting.  The patient was passing stools and urine regularly. The patient was very much relaxed and happy with the results.

Homeopathic treatment can be helpful in surgical cases also. Most people can manage Gastro Esophageal varices with homeopathy by changing their lifestyle and diet management.