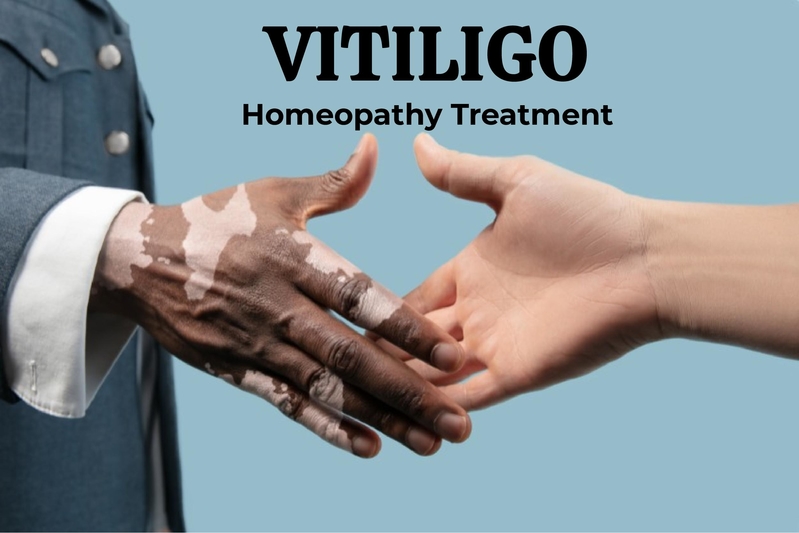 Progression of the disease:

In this types macules generally can appear in any part of the body or sometimes all over the body.

This is restricted to only one side of the body or only one area such as hands and face.

This affects the mucous membranes of the mouth, nose, and genitals.

This is one of the rarest types where macules may not appear for years after exposure to certain parts of the body.

This can affect the mucous membranes of the eyes, nose, and genitals.

This is one of the best remedies in cases of vitiligo, eczema, urticaria. Affected parts are mostly hands and face. In the mental sphere, it tackles anxiety state and used in the treatment of the effects of stress on the body. Tendency to affect one side of the body.

It is one of the polycrest remedies and has a broad spectrum of action useful for a wide range of disease processes. More prone to people who have vitiligo and are sensitive to cold wind and who tend to sweat on palms and soles. It affects arms forearms and especially lower limbs of the body complaints appear gradually within years of time.

This is one of the best remedies in the Homeopathic treatment for vitiligo. It has discoloration of the skin which appears in blotches that are pale and white in color. There is intense itching present all over the body. Pyoderma and urticaria also call for this remedy.

This is deep acting polycrest remedy that acts on multiple systems of the body. This remedy has shown wonders in treating vitiligo for a long-standing duration. It is a useful drug to combat disease which is destructive in nature and deep seated. Usually affects almost every part of the body including hair.

This is also one of the best remedies in treating patients with vitiligo. It is a deep-acting constitutional remedy. Also has benefits in treating warts, ulcers, fissures. Involvement of mucous membrane of mouth, nose, and genitals present.

Dr. Vaseem Choudhary along with his team has treated many patients successfully for vitiligo so if you’re looking for your cure please visit our center for further assistance.