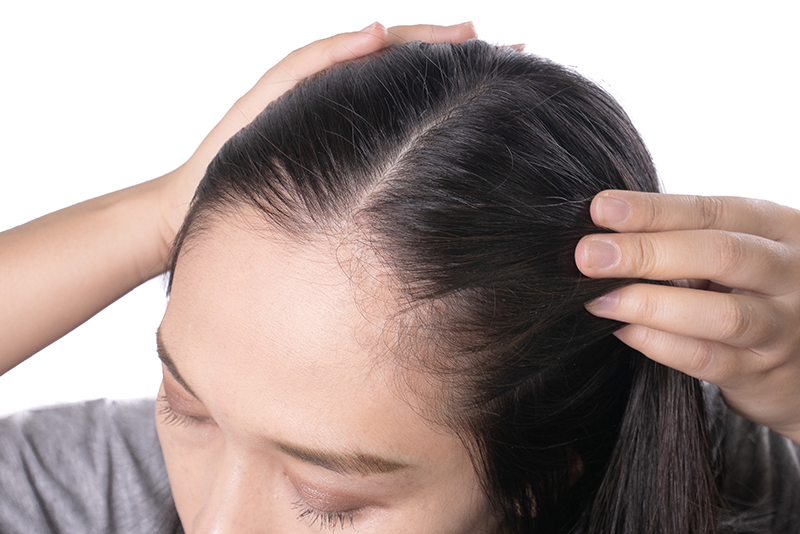 A 9-years-old female child (Patient Reference number: AAO-107) visited Homeo Care Clinic accompanied by anxious parents and relatives on 29th June 2019 to get his Bald spots on the scalp (Alopecia Areata) treated. The child’s mother noticed bald patches on his scalp that were gradually progressing in size and number. The patches started becoming evident after six months and in the year increased tremendously. On examination, the child had four- six big and multiple small patches on various parts of the scalp.

On inquiring about the family history of baldness, his mother mentioned that there was a prominent family history of baldness on the paternal side of the kid, and the child’s father was completely bald. They tried many other medicines like Lotion Flucort, Tab. Flucos 150 mg 1 OD, Oint Flutibact, Inj. Kenacort locally in patches, Momate lotion, and Tab. Betnesol forte, there was no visible recovery.

The child used to have a mixed diet, and she had a good appetite. She had a very less intake of water. She had craving for sweets, ice cream, and chocolates. She had profuse sweating on her palm and sole.

There was no major illness in the past.

There was a strong history of baldness on the paternal side of the family. Maternal grandmother was suffering from recurrent bronchitis and paternal grandfather was diabetic and hypertensive.

The patient was the second child in the family. She has a younger brother. She is studying in 3st Std. he was living in a joint family. Her father was an officer in the defense ministry, and his mother was a housewife. The child’s mother explained that she was a quiet, shy kid. She was very timid initially but later on started mixing. She cries easily. Fear of the dark.  Academically, she fared well and used to mix up easily with the children of his age.

Based on a thorough evaluation of his complaints, Dr. Vaseem Choudhary prescribed the remedy Pulsatilla 200CH.

The first follow-up after 6 weeks on 10th August 2019, patient’s spots started improving We continued with similar medicine for 6 weeks.

Then in the second follow-up after 6 weeks on 25th September 2019. Patient spots completely recovered.

He was advised to discontinue the medicine.

If you are facing any hair-related issues must consult with Dr. Vaseem Choudhary at Homeo Care Clinic, Pune.